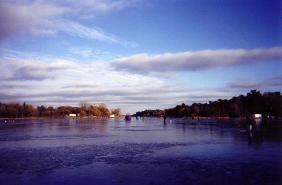 The  kids are  at the  bus
stop, sporting their winter
coats,  mittens,  and  knit
hats.  It’s  getting  colder.

Every    consecutive
morning that the thermometer on the house reads 32 or
below, I make the same trek.

A trip to the local honey hole, chisel in hand. Hoping and
wishing against all odds that there is ice.

I don’t need much, just 2 and a half inches, give or take an
inch, to hold my 165 pound frame and plastic tote trailing
behind.

And just like years before, disappointment fastly sets in. There
isn’t enough ice. As a matter of fact, there isn’t any ice. And I
retreat, disappointed, yet still anxious.

At 5pm, there I am, grilled to the TV awaiting the weather
report.

Ah Ha! 22 degrees tonight the weather person announces.
That should make some ice. And then, with great anxiety, I
think back to years before and try to recall how much ice was
formed by previous 22 degree nights.

Why, I can remember one night as if it were yesterday. The
low was 22 degrees, and the 1/2″ skim that had resided on
the lakes surface the day before was magically transformed
into 2.5″ of hard, clear ice. I was ecstatic. After all, 2.5 inches
of ice meant I was fishing…On hard water!!! And I was
glowing!

But then I grew fastly disappointed as I recalled there was
already a skim of ice formed in this example. The lake is still
wide open right now. But there is still hope.

22 is below freezing, and the wind will be calm. Perhaps
tonight the lake will freeze over, and tomorrow night the safe
blanket of ice will form, and I will be fishing.

I am happy, as I convince myself I am merely 2 days away
from ice fishing.

But wait…I am soon reminded that not only is the lake wide
open, but the water is still in the upper 40 degree range. Now
I am depressed.

But then I get scientific. Water freezes at 32 degrees. Is that
32.0? Or is it 32.9? After all, it makes a huge difference in how
soon I will pursuing pannies through the ice. I need to know.

Every year, around the same time, the front yard is sporting
the ice augers, and shantys, as I prepare for the upcoming ice
season. This typically takes place around Halloween.

Because one never knows when the first safe layer of ice will
form. And if you don’t know, then you may miss something by
not being prepared. I will be prepared. I am every year.

Sharpening blades, rigging jig sticks, charging the locater
battery, patching holes in canvas, and tuning up the gas
auger. Yep, we’re getting ready, and we won’t miss a thing.

And then the neighbor comes over to remind me, just as he
did last year, that his bedroom window is adjacent to my
garage door, and he doesn’t appreciate the sound of 2 cycle
exhaust at 2am.

He reminds me that the season is early, and I am jumping the
gun, just as I did last March, when he reminded me that my
outboard is louder on water muffs in the driveway then it is in
water, especially at 2am.

I apologize, and offer that he doesn’t understand. I have an
addiction. I have a desire. I have to get Crappie slime on my
hands, or I just may go insane.

He reminds me of how I put away the snowblower last spring,
and it was followed with an immediate foot of wet snow.

He reminds me of last fall, when I was for certain I would be
fishing within days on hard water, and the week long stretch
of 60 degree days that followed.

He reminds me once again, as he lowers his baseball bat, that
he can not strike a man with a disability, but he would like to
get some sleep, and he retreats home.

I think, deep down inside, that I can control the weather by my
actions.

I mean, the neighbor can. He simply washes and waxes his
truck every Friday during the summer, but only on the Fridays
that precede the Saturdays that I will be fishing. And it rains,
every time. If he can do it, then I can too.

Why else would I bundle up the kids, and send them to the
bus stop, scarf’s, mittens, boots, snow pants, the whole ball of
wax. Never mind if it is 60 degrees, we have to will the
weather to chill.

It is extreme, I will admit, but I want to ice fish, and there isn’t
anything I won’t try to bring Ma’ Nature’s chill here a few
weeks early.

Northern   pike   are   known   for   their aggressive-nature and dominance over prey.  Pike are also a very hard-fighting fish that like to rip drag and max out the action  of a rod.  The  explosiveness of hooking  a  pike  in   open   water   can indeed  have similar  effects under  the ice. Pike will still spend most of their…

By: Matt Johnson When one thinks about ice fishing, they typically picture walleyes, crappies, sunfish, perch, pike, maybe even a lake trout or eelpout, but not many people think of catfish. Even the mere idea of catching a catfish under the ice results in scowls—sometimes even laughter.  But for those of you who venture out…