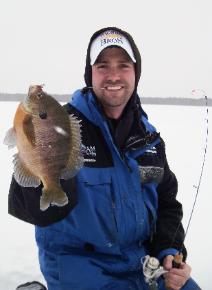 Patterning   these   evasive   creatures   can
seem  as  complex  as   linear  algebra,   but
patterns do exist, and you don’t have to be a
mathematician  to   discover  them.  Locating
these “bull” gills is only  half the battle,  but it
can be the most important part of the equation.

Large sunfish will relate to the forage they prefer, often times over soft-bottom
areas with an abundance of plankton, blood worm, scuds, and other micro-
organisms. Sunfish will also hold to weedy areas, and will utilize those areas as
long as oxygen and forage continue to provide them with adequate
surroundings. Once the weeds turn brown and down, you can expect the larger
gills to move on and find more suitable areas. However, keep note of those
areas as possible late ice spots, or even early open water areas. Those larger
sunfish will return to the weeds once they begin to flourish with life come spring.

Soft-bottom areas are prime “bull” gill spots. These soft-bottoms are profuse
with a forage-rich environment. Sunfish can devour tiny morsels of food all day
long, and even into the evening hours. Often times you can find sunfish holding
to the bottom across these expansive sticky-bottom areas. My flasher only
displays a quivering bottom at first glance, but slowly a massive red blip rises
from the bottom telling me I’m about to begin a tug-fest with the “bull” gill.

Some of these areas can be rather intimidating, and rightly so. Some of these
soft-bottomed areas can appear to be larger than a football field. Deciding
where to begin your search can be tricky, but by paying attention to the nearby
structure you can limit your time at punching holes over “dead” water. I prefer
mid-depth areas where you can find both shallow and deep water in the vicinity.
Areas dropping off a hump or neck-down area (narrows between two large
bodies of water, but not a channel) are two of my preferred locations.

Large soft-bottom flats in 8-15 feet can hold large sunfish all winter-long. These
“bull” gills don’t need a lot of structure to survive. However, small depressions in
these expansive flats can attract fish, same with subtle humps and pockets of
weeds or brush. Abrupt breaks dropping from shallow water weed lines can also
draw-in sunfish, especially when the bottom of the break is composed of a soft-
bottom. Consider it a “highway” to these large sunfish, and they will roam
around those areas throughout much of winter.

Staying mobile is key when targeting sunfish over soft-bottom flats. They will not
stay put, and you can expect to punch a lot of holes and cycle through each
hole more than once. Firing off 10-15 holes over a 30 yard piece of structure is
not uncommon, and once the fish vacate from one hole it doesn’t mean that
they won’t be back. “Bull” gills are spookier than your average sunfish and they
will be more apt to cruise once any sort of commotion takes place.

Now, I said earlier that location was only half the battle, and as you guessed,
there are two sides to every page. The second half typically takes less time, but
it’s the part that brings home the bacon. It’s time to figure out what those fish
want to eat.

During the winter months, sunfish will generally feed
on micro-organisms and small-bodied creatures.
Presentations that mimic these small critters are what
you’re looking for. Size 10-12 hooks will be your
standard for these midwinter “bull” sunfish. Small-
profiled baits seem to be the desired means of attack
for enticing those finicky sunfish. Tip these jigs with a
piece of plastic and you have yourself and nice little
bluegill snack.Seeing the bite is very important when targeting “bull”
gills. They have the tendency to bite very light, and
relying solely on feel can result in missed
opportunities. Incorporating some sort of spring
bobber can give you the upper hand when detecting
light bites. Sunfish are notorious for “tasting” the bait,
only to spit it out moments later. The spring bobber
will allow you to “see” these subtle attacks and you’ll
see your catches increase.So, start by searching out likely areas where you
think large sunfish will be holding. Grab a lake map
and look for areas where soft-bottom flats come in
contact with/near adjacent structure. Breaks can be
considered as possible nearby structure. Then once
a spot is isolated, stay mobile and be willing to work
over the area thoroughly. Punch a lot of holes and
cover a lot of ground. Next, down-size your
presentation if the situation calls for it. Staying small
will imitate what these larger sunfish feed on. And
along with down-sizing you presentation, include
some sort of spring bobber to help detect light bites.
I have only touched on the tip of the iceberg, and hopefully some of these tips
for pinpointing “bull” gills can be applied to your particular body of water. There
is still a lot to be said about locating and catching “bull” gills through the ice.
Large sunfish are something to be admired, and catching one of these brutes is
something to be proud of.“Bull” gills – set the hook and enjoy the ride!Good Fishin,
Matt Johnson

Springtime panfish are universally sought- out, which is mostly due to their nature of being aggressively schooled-up and more than eager  to attack  whatever you put in front of their stout little noses. Big sunfish and slab crappies are  caught throughout the   Midwestern  belt   during  the  spring season  and  it  provides  some  excellent action for…

We make mistakes as anglers, and oftentimes it’s those mistakes that make us sometimes no matter what you do, things don’t seem to go your way. Don’t get discouraged. Bass fishing can be a game of “walking the tightrope,” where Understanding that there are situations where you need to buckle down and take things…

By: Matt Johnson We live fast-paced lives. Everything is go, go, go. Speed is often considered something of importance, whether it’s in reference to sports, completing tasks, get to and from locations, and even productivity on the ice. How fast can you move from spot to spot, how fast can you drill a series of…