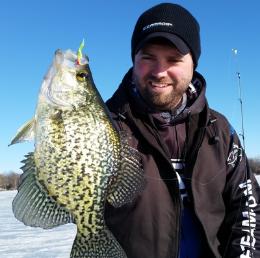 Crappies  are  a  sophisticated  fish,
especially those slabs, and at times
it  can   be   rather   confusing   and
frustrating for ice anglers to pinpoint
slab   patterns.    Some   lakes   are
abundant  with slab  crappies,  while
others  are  more   inclined  to  hold
smaller  fish,   and  then  you  have
those lakes where  you can catch a
mixed bag.  Regardless of  the lake
or   body    of   water,    location   is
important  when  it  comes  down to
being    a      successful      crappie
fisherman during the winter months.
Flashers—like the Vexilar FLX-28—allow ice anglers to quickly determine
whether or not fish are in the area, because we know that locating the elusive
slab crappie is more than half the battle. If you can establish a pattern of where
these fish will be holding then the rewards will come.

I always pay close attention to fall patterns, especially at late fall as the water
plunges into near freezing temps. Crappies will begin staging for early ice as
the fall months approach, and they will begin to stakeout areas that they plan to
utilize at early ice. The turn-over period is where I start. This is when the
thermocline diminishes and the cool and warm water start to mix. The typical
deep water crappie patterns of the hot summer months will turn into shallower
water patterns. (Keep in mind that rivers will be different and not every lake will
experience the same effects either, every body of water may be different from
the next). When the water mixes you will typically find the crappies in some sort
of migration stage (in lakes) and they will start to slide to the initial breaks and
suspend off shallow water edges instead of constantly roaming the deeper
depths.

The turn-over period might not last too long. Once the water turns over and the
temps drop more and more, you will begin to find fish staging in their early ice
locations. Summer and late-summer crappies will stage, often times, suspended
in deeper water at the same level of the top of the initial break line (flat). So if
you have the top of your break reading at a depth of 10 feet on your Vexilar,
and you drop into about 25 feet at the basin, you will find crappies suspended
15 feet off the bottom out on the basin. These fish will roam and you will often
times mistake them for baitfish, or when you try to pinpoint them they just keep
moving (that’s part of the reason it can be tough to find the big slabs in the hot
summer months). These fish will begin staging for the winter once fall
approaches and will feed on whatever is in front of them if the opportunity
presents itself. Intercepting these fish can be tough on lakes with large basins
and limited structure.

I don’t typically follow the crappie movements as much during the hot summer
months since they are so sporadic, but once they begin moving into winter
patterns that’s when they get my attention (ok, I’m an ice fishing geek).
Learning the fall (turn-over period and into early ice) patterns has a lot to do
with finding the slabs at early ice. Smaller crappies will stack-up in obvious
shallow(er) spots at early ice, but you will still find some of your larger fish off
the so-called “prime hotspots” at early ice.

Early ice crappies will relate to the weeds—at least as long as they provide
oxygen (which may last quite a ways into winter or even throughout winter in
some cases). I personally don’t think that the larger crappies need to relate to
those weeds, I’m not saying that you won’t catch slabs in the weeds at early ice,
but I’m just saying that those weed areas tend to draw in more smaller fish as
well as potato chip bluegills and hungry roaming pike. The larger crappies
(concentration of fish) that I do typically find in the weeds are located in lakes
where the weed line pushes out into deeper water, say 12-15 feet or even
more, and I find the slabs right out on the deeper portions at early ice.
Meanwhile, the smaller fish are holding shallower. On the contrary though, I will
find larger crappies locating in weeds associated with main lake structure.
Large underwater points with a weed and hard-bottom mix can sometimes hold
some of the largest crappies in the system at times, but I tend to stumble across
these patterns more towards mid-winter.

Once the thermocline does a flip-flop (and disappears) and you complete the
turn-over, you will notice that the crappies will have adjusted to a whole new
area. During this time you won’t find the crappies suspended over the deeper
water 24 hours a day, or even at all anymore. They will relocate to shallower
water, whether it’s immediately adjacent to the break, or along the deep weed
edge. Once they move up into the weeds they will relate to the shallower weeds
until they die off (assuming that they do in a typical lake situation), then they will
cling to the oxygen-rich (slightly deeper) weeds until those are gone. Now, this
is a general crappie pattern, and not true for every lake and not always true for
all the larger fish. This is, how should we call it… “crappie intuition.”

Turn-Over (thermocline dies)
Crappies move from deeper water and stage off shallower water. Keep an eye
on areas where you know the crappies where at during early ice in the past and
move out from there.

Thermocline is Dead…Full Turn-Over
Crappies are holding off shallow structure, more tight though. Weeds are dying
and fish gradually slide deeper. This can also be an early ice stage on occasion.

Early Ice
Shallow, oxygen-rich weeds and primary breaks. Look for depths anywhere
from 3-15 feet. Weeds will die as ice thickens and crappies will gradually move
deeper. Narrows can be good too.

This is my view of a typical crappie movement from late summer to early ice for
your typical lake. I have some lakes where the pattern is very different, and
some lakes where you catch your early ice crappies in deeper holes. Keep in
mind that these crappies that are found in the deeper holes at early ice might
have already migrated shallow and already moved back out into deeper water
(crappies will move back out as ice thickens, oxygen diminishes and light
penetration gets worse…).

So, with that being said, where are the crappies at early ice?

Well, for one, we have the weeds, an obvious option for a good number of
crappies at early ice. Shallow bays on large bodies of water are good early ice
locations. Any depressions in the bays should be marked on a map and
checked out as well. These are “pockets” in the weeds. I also like to find the
weed edge and punch a line of holes across that as well. Breaks just off the
weed edge will also hold crappies at early ice, both suspending and bottom
hugging. Some of these areas will have no weeds on the actual slope, but once
it flattens out again you will see more weeds, this is a prime example of an early
ice slab spot. Work those deeper weeds and stay moving until you locate a
school of fish. Depths of 10-15 feet are not uncommon. Also check out humps
and saddles too. Weeds are good, but don’t only judge early ice spots by where
the weeds are, stay open minded. Wooded areas can also hold a good number
of crappies at early ice, same with rocks and muddy areas.

I also like to find spots where there is a narrow area between different portions
of the lake, like “bottlenecks” and deeper channels (deep could only mean 6-7
feet). These channel areas often times freeze first and the crappies fishing can
be excellent during first ice. These spots are short lived though, and the bite
might only last a week or so. If you find the crappies holding in these areas at
first ice, than there’s a good chance that those fish will relate to adjacent
deeper water once they move towards the main lake basin.

Mouths of shallow bays are good areas to target too. Crappies will relate to the
transition areas in these mouths, and once they move out from the bay these
areas might be the new hot spot.

Early ice crappie locations are going to be different from body of water to body
of water, but the general principles still apply…

Location is number one for most of the winter when it comes to crappies. Locate
the aggressive school of fish and then figuring what they want is the easy part.
If you find fish but there are negative than move, there typically are some active
fish somewhere, and often times they won’t be far.

Early ice can produce some nice catches, and hopefully some of this will help
you ice more slabs this winter.

By: Matt Johnson We’re starting to embark on the time of year where fish tend to meander more frequently. Staying on top of the fish can be very difficult at times and it seems as if we’re only catching one or two fish out of a hole before the school moves on. If this appears…

By: Matt Johnson and Tom Zenanko Vexilar,  maker  of  three-color  flasher  sonar technology,    has   blended    classic   Vexilar Flasher    performance  with   a   cutting-edge brushless data transfer technology to create a new   generation  of  sonar   for  anglers:   the FLX-28.  This addition  to the Vexilar  lineup is considered the company’s new flagship model and will be a part…

By: Jeff Huehn Every   year,   its  a  sign. The  kids are  at the  bus stop, sporting their winter coats,  mittens,  and  knit hats.  It’s  getting  colder. Every    consecutive morning that the thermometer on the house reads 32 or below, I make the same trek. A trip to the local honey hole, chisel in hand. Hoping…