When one thinks about ice fishing, they 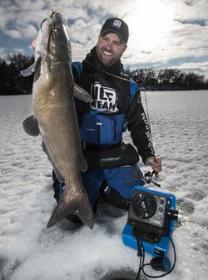 typically picture walleyes, crappies, sunfish,
perch, pike, maybe even a lake trout or
eelpout, but not many people think of catfish.
Even the mere idea of catching a catfish
under the ice results in scowls—sometimes
even laughter.  But for those of you who
venture out chasing these whiskered critters,
you’ll find yourselves smack-dab in the
middle of not only an incredible tussle, but
also one of the tastiest winter fish across the
ice belt.

***Before moving on with this article though,
I want to stress the importance of safety.
Current—or areas where current is nearby—make-up some of the following
locational patterns. So please keep ice safety a top priority as you read the
following locational tips for finding catfish.

So just where do these catfish spend their winter? As a general rule, catfish will
locate in deeper water or areas where current catches their attention. These
fish will hold in those deeper pockets, but I’ve also found them as shallow as
five feet. It all depends on the body of water—so “deep” is relative. Shallower
ponds and lakes will have catfish holding in the deepest parts—providing there
aren’t areas where there is an influx of water. I prefer to target bodies of water
that are connected to rivers or creeks/streams. Off-shoots from major rivers
that pool into lakes and systems are excellent places to target as well. Finding
catfish can be relatively easy if you just spend a few minutes studying a lake
map before punching any holes, but here are a few ideas to narrow down your
search…

In lakes/reservoirs with deep water, I like to search out for the “channel” and
focus my search relating that.  Now this does mean actually fishing the channel,
but rather use that as a reference for where the catfish might be holding. Most
of these reservoirs and lake systems have main channels where rivers (at one
point) ran strong or might even continue to push current through them. These
channel areas oftentimes create burrows along the bottom giving away to cuts
and depressions where catfish gather for comfort. It’s almost as if these cuts
are “roads” for catfish to follow. Tough part about this equation though is that it
can be hard to pick up fish on the Vexilar in these areas unless you’re right on
top of them. Though some catfish will suspend, many of them will relate to the
bottom and need a little coaxing to come up. I see this happen more in lakes
with less current, as in current systems I tend to find more suspended fish.

Sometimes these cuts are only a few feet wide, while in other situations you can
find them several hundred feet in width. And sometimes the depth only changes
a few feet. It all varies on the given body of water and from spot-to-spot. I prefer
areas where you can find deep water leading from a shallow inlet—meaning
water coming in. These areas seem to create the best “rut” for these fish to
hold in. And if you are fortunate enough to have some current (more than the
natural current of a lake) then you might have found yourself a gold mine. I
typically expect to see fish stacked up in these situations and see these spots
are their “wintering holes.”

Other areas of interest include spots where parts of a lake neck-down, causing
current. Flats just adjacent to these areas will generally hold catfish, especially
if those flats are deeper or even create a hole or depression of their own.
Catfish rely heavily on their sense of smell and will move with current to grab
the bait once detected. This is why we fish just upstream from snags during the
open water months, so when a fish smells “what’s cooking,” they come out to
take a taste. The scent travels downstream and pulls the fish out. While this
doesn’t give you the end-all answer for winter catfish, it does give you a few
more chances and can narrow the search when looking at a map—especially
when deciding where to setup camp.

Some of my personal favorite spots to target winter catfish are holes along the
main river (if ice is safe). Warning though, and to reiterate safety, as these
spots rarely see more than a foot of ice so proceed with the utmost caution.
Check the ice constantly and don’t make an attempt to target these spots at
early ice. Leave these spots for mid-winter, as even during extreme winters we
might still only see a few inches of ice over these areas because of current
conditions. But if you are fortunate enough to take advantage of these
situations, then the rewards can be great. Heavy spoons packed with pieces of
minnow will do the trick and hold on—the fish seem to find you!!

There are however, spots similar to the above mentioned holes that are along
stretches of lakes where there is less current and safer ice—and you don’t
have to always focus on current areas to catch catfish either. Lake systems that
form off of rivers will present similar spots and can be fished just the same. In all
actuality, if you can find spots off the main river that are pushed back into lake
chains and backwaters, then you’re going to also find consistent action for fish
of all sizes—not to mention much safer ice conditions.  Many “lake spots” that
we fish each winter see the same ice conditions that most of the lakes we fish
on, and larger vehicle traffic, plowed roads, etc, all come into play as well. 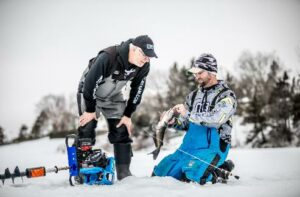 Presentations for these whiskered fish are simple… rely on scent as your main
weapon and don’t think for a second that these fish won’t chase an active
presentation. What I mean is, use multiple pieces of minnow and don’t be afraid
to have the entrails hanging out, and then jig away! Don’t cut the minnows
either, pinch them, it leaves what’s left on your hook a lot more enticing!
Walleye anglers are supposed to be more sophisticated when attaching just a
minnow head or tail, but for catfish, you just gob those babies on! However,
there are times when just a small piece is all they want, but I oftentimes error on
the side of excess and give them meat!

Jigging spoons are a great tool for these situations in my opinion. You can pack
a treble hook and present a nice “bait ball” for the fish to grab onto. I always
replace my trebles with a size larger and with a forged round-bend hook if
possible. The catfish put a lot of abuse on your hooks and can straighten them
out if you let them! Some of the spoons I really like are the Clam Pro Tackle
Small Pea (replace the single hook with a treble hook), the Rattling Blade
Spoon and the Leech Flutter Spoon. It’s a nice variety of options that fish
differently.  Otherwise a larger panfish jig like the Clam Pro Tackle Drop XXL
packed with maggots or a piece of minnow can coax finicky catfish into biting as
well. Fathead and crappie minnows are generally all you’ll need, so an easy find
at most bait shops. I do bring some sucker minnows and cut them up for dead-
sticking at times, too.

Techniques for getting these fish to bite can at times depend on their mood—
much-like all species. Let your Vexilar be your fish’s mood indicator, and let it
tell you what type of action they prefer. Oftentimes you won’t have kamikaze
catfish, but rather light biters like we experience with our crappies at times.
Subtle shakes and quivers will sometimes be more than enough, and then just
watch your line once a fish appears over your bait! These fish are notorious for
just sucking in the bait without anyone knowing, or “tasting” the bait with their
whiskers. Spring bobbers and noodle rods definitely help, but by constantly
moving you rod tip you can tell when a fish has the bait, as there will be an
abrupt deadening of the rod tip. When that happens, you better set the hook
into that whiskered cinderblock and get ready for a fight! Not to only focus on
finesse though, I generally deploy a more aggressive jigging sequence to begin
my day, and work down from there to find the desired results.

Some of the rod choices I prefer are the Jason Mitchell Dead Meat or a medium
power in the Dave Genz Legacy line-up.  I also have a variety of custom rods
from Thorne Brothers specifically built for catfish—yes, I know, we are
wintertime catfish dorks! A soft tip is important, as these catfish are light-biters
and you’ll need that to detect the bites some days. Then I pair these rods with a
1000 series size for a reel.  The Dead Meat comes in a great combo as well.
And then for line I use the Clam Frost Ice Line in 5-6# monofilament and away
we go! So there are excellent over-the-counter rod options out there for
targeting catfish, but feel free to have fun with it and have a custom rod built as
well!

There’s no doubt that catfish can provide a lot of action and excitement out on
the ice. And most areas across the ice belt have lakes nearby where catfish are
abundant. Like all fish species though, practice selective harvest, as catfish can
and will school-up in the winter, and over-harvesting can still take a toll on the
catfish species. But if you do decide to take home some catfish for a meal,
there is nothing better than a nice Cajun-battered catfish fillet from cold water!

When ice fishing for crappies,  it seems  that sometimes there  are a lot of things  that are needed to complete a catch. Increasing your odds is the name of the game and having an arsenal   of   techniques   is   how   you   win. Deadsticking   is   just   one   of   the   many techniques that can increase  your catch on…

By: Matt Johnson When it comes to ice fishing, the infamousauger is something that plays a role literally every time you hit the ice. Of course, there are those days where you might rely on someone else’s open hole, but as a general rule, the necessity of having an auger is vitally important to even…