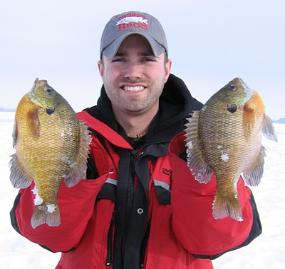 frequently. Staying on top of
the fish can be very difficult at
times and it seems as if we’re
only catching one or two fish
out of a hole before the school
moves on. If this appears to be
a routine trip for you then
don’t loose hope. There are
ways to help you catch more
fish out of each hole…

Staying on top of a school of
fish is oftentimes more than half the battle. If you could only get one or two
more drops down before the fish move on. Then you move to the next hole in
hopes that the school went in that direction but you only find an empty water
column on your flasher. Sound about right? These fish need something to help
them stick around and they need to obtain a certain level of comfort, especially
when dealing with trophy-size fish.

Adding some sort of attractor is very critical in situations like this. Dropping
down something loud and flashy can sometimes draw fish in (although at times
noise can be a detriment to finicky fish, so use noise more sparingly than
visual appeal). Something flashy is more likely to attract fish to the area. A
shiny jigging spoon or a gold or nickel jig can draw fish in. Grab their attention
and then let them decide if they want to eat.

Another option is to drop down a lively minnow out of a separate hole nearby.
It doesn’t have to be drastic. A simple crappie minnow can even do the trick.
What this does is draw fish in and more often than not keeps them in the area.
The curious fish will relate to the struggling minnow, and even though they
might not be interested in eating it, they still find it somewhat appealing. Result
factor being that you get more swings at that cruising school of fish.

The minnow trick can work for all species; you just might have to upsize the
offering in order to entice the desired specie. Sucker minnows are great
walleye and even perch attractors. Even panfish will relate to a struggling
sucker or shiner minnow, so don’t neglect the fact that smaller fish will target
larger prey. Again, we’re not expecting these fish to necessarily eat the
offering; we just want them to be attracted by it.

Keep in mind however, that this decoy line is considered one of your two lines
(if in Minnesota), so now its up to you to catch the fish with your jig rod.

Yes the minnow trick is nifty, but when I’m looking for that added punch I turn
towards my artificial structure in the form of Reel Weeds. We’ve all seen its
recent wave of popularity in recent years, and its no secret that these fake
weeds work. Adding structure into a structure less area is worth its weight in
gold during certain conditions… and if you ask me, one of those conditions is
right now when we’re trying to keep the wandering school underneath us.

Dropping down a series of Structure on a String will increase your chances at
keeping those schooling fish in your area. Even in areas where weeds are
currently present, adding a piece of structure out of the norm with grab the
fishes attention. Just look at it this way… when we see a new steakhouse open
up on our favorite highway we notice it, and more often than not we soon
decide to stop in for a bite. Consider that new addition of structure to be that
brand new steakhouse.

Now, we’re not looking for the fish to stay there forever, all we’re looking for at
this time is to have an extra swing at the ball, or even a swing at all. Instead of
watching the school move, you now have more opportunities to set the hook.
Even the most negative of fish will stop in to take a peek.

Fish equate green weeds with forage… forage oftentimes equates to hungry
fish… and hungry fish equates to more pictures of you holding trophy fish.
Even though Reel Weeds might not produce oxygen, we’re dealing with fish
who do in fact believe the appeal and color are indeed real. Fish are simple
creatures really. Drop something shiny down and they flock towards it. Drop
something down that moves and they’ll swing in for a look. But drop something
down that looks real and provides comfort… well then, you might just have
found yourself a hole with more than one fish.

***Reel Weeds are designed by LaDredge Outdoors and come in several
different options. To learn more about Reel Weeds and to watch underwater
footage of Reel Weeds in action please visit www.reelweeds.com..

By: Matt Johnson Maybe — but  it  can  take  some  real  effort. You have to pull out all the stops and then if you can’t figure out  what to  get  a  reaction with then it may be  time to  move.  What top anglers do  to get the  fish to  bite when they don’t want to……

By: Matt Johnson When one thinks about ice fishing, they typically picture walleyes, crappies, sunfish, perch, pike, maybe even a lake trout or eelpout, but not many people think of catfish. Even the mere idea of catching a catfish under the ice results in scowls—sometimes even laughter.  But for those of you who venture out…

When ice fishing for crappies,  it seems  that sometimes there  are a lot of things  that are needed to complete a catch. Increasing your odds is the name of the game and having an arsenal   of   techniques   is   how   you   win. Deadsticking   is   just   one   of   the   many techniques that can increase  your catch on…