When ice fishing for crappies,  it seems  that 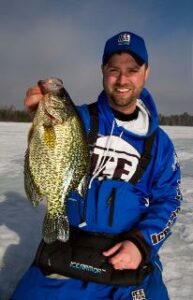 sometimes there  are a lot of things  that are
needed to complete a catch. Increasing your
odds is the name of the game and having an
arsenal   of   techniques   is   how   you   win.
Deadsticking   is   just   one   of   the   many
techniques that can increase  your catch on
the  ice  this  winter,   and  it  can  offer  that
ne-two-punch for catching more fish on days
when nothing else seems work.

Deadsticking basically consists of a stationary
rod: either in a rod  holder, across a  bucket,
or whatever  way you want.  This  is meant to
keep a  presentation at  a certain  level and
without action from the angler.  Using a float
or spring bobber as a strike indicator can be
implemented into this setup well. The action of a deadstick is all dependent on
the bait or lure. Minor movements some be added at times, like a little jiggle of
the rod to keep things active, etc.

Let’s look at these in more detail…

It Allows You to Use Two Different Presentations
Using two different presentations can help you to determine what the fish want.
Whether using both maggots and minnows for live bait, or plastics or swimming
lures for artificials, it tells you what fish prefer and which ones are not worth
using at that given time. If noticing that minnows are working but you can’t buy a
crappie on maggots or plastics, then you can switch both lines to minnows and
vice-versa.

It Draws-in Fish When Using a Lively Minnow
This can be one of the most important characteristics. Often have I been fishing
only to have one or two fish show up and then leave, but by dropping down a
minnow on a deadstick, it kept those fish there and also drew-in other fish to
see what all the commotion is about. Fish will stay as long as they have food (or
something to grab their attention). How many times have you been fishing a
school of crappies and after you catch a fish the school moves on before you
can drop your jig back down? I know it has happened to me numerous times,
but by dropping a minnow down on a deadstick you will notice that some of
those schooling crappies will stick around longer, maybe not to feed on the
minnow, but because they feel food is still in the area. It works.

It Allows You to Fish at Different Depths at the Same Time Covering
More of the Water Column
Crappies move through the water column at different depths, and without the
use of a Vexilar that is usually missed. If you are fishing at the wrong depth then
sometimes the fish won’t even come into your area if they are not in-line with
the depth of the jig. By deadsticking a desired presentation at different depth
than you’re jigging, you can utilize more of the water column and stay in-line
with those suspended crappies—not to mention those crappies roaming the
bottom too. We oftentimes miss crappies because they “slide in and slide out”
and intercepting them at different depths can really pay off.

It Can Weed-Out the Bigger Fish and Trigger Them to Strike
I’ve noticed this to be the case for crappies on several occasions. The larger
crappies pass up the active jig and engulf the deadsticked minnow or offering
on a plain hook or jig. Often times the more aggressive crappies will take the
lively minnow when fishing during twilight periods and they are typically the first
ones you catch, which are also some of the biggest. Larger crappies often
times want a piece of meat and a struggling minnow is an easy meal. Don’t get
me wrong, we catch a pile of crappies on plastics and aggressive techniques
during prime-time, but a lively minnow to a hungry (or even leery?) crappie is
hard for them to pass up.

It Can be Your Only Means of Success on a Negative Day
If you can understand deadsticking and find a system that works, it can really
improve your catch on negative days. On those negative days, spooky crappies
dart at the sign of anything that moves too fast, looks too fake, or isn’t sitting
still and right in their face. By deadsticking a small 1/64oz jig—or even smaller—
with a single maggot or small finesse plastic, you can accumulate a nice catch
even on those tough, seemingly impossible days. Let the fish have a starring
contest with your jig and let the maggot or tiny plastic do the work. Although you
might think the plastic or maggot isn’t moving, it is. The fish know that and those
microscopic movements are what those crappies pick up on because they are
accustomed to feeding on zooplankton and micro-organisms, many times
smaller than your jig. Slowly will the crappie move towards the jig and with a split-
second rake of the gills the jig is inhaled. The art of keeping the jig as
motionless as possible can really help on those days when nothing else works.

And, It Doubles Your Odds When You are Trying to Pinpoint the Proper
Presentation
Doubling your odds, now who wouldn’t want that? Increasing your odds is the
name of the game, and by deadsticking you are doing what it takes to catch fish
and improve on a day of fishing. Two lines can be better than one!

Try deadsticking for crappies next time you are on the lake if you haven’t
already. You might be surprised.

By: Matt Johnson Ice anglers have a wide variety of bait available to them, and each type of bait has its place and time. Maggots come in all different shapes and sizes, and recently, even colors. Minnows are a very broad category, and are used throughout the ice fishing season and for almost every species….

By: Jeff Huehn Every   year,   its  a  sign. The  kids are  at the  bus stop, sporting their winter coats,  mittens,  and  knit hats.  It’s  getting  colder. Every    consecutive morning that the thermometer on the house reads 32 or below, I make the same trek. A trip to the local honey hole, chisel in hand. Hoping…