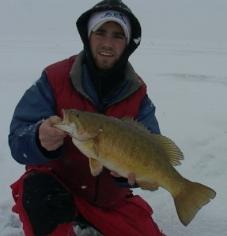 You bring up a  very good point
and it is  something  that can be
applied to all species some way
or  another.   When  attracting a
fish to the area it will  often take
some   aggressive    techniques
added   with   some   flash  and
vibration,     especially      when
fishing  a  large  body  of  water
over a featureless flat. You want
to draw  fish in  from a  distance.
Once  a  fish  approaches   you
don’t want to stop  aggressively
jigging, just tone the sequence down a bit. So instead of popping a spoon in 1-
3 foot increments you might want to start some jiggle-pause sequences, but
you still want to remain somewhat aggressive. The fish were drawn in by the
aggressive technique and that’s what will ultimately seal the deal. Don’t just let
the bait/jig sit motionless when a fish appears on your flasher, that will
sometimes have a negative affect. I prefer to keep the jig moving, but I’ll use
quick, short shakes and jiggles, and if I get a response or rise out of the fish,
then I will add in pause sequences.

I also like to slowly pull the bait away from the fish as I continue to jiggle, this
drives the fish crazy sometimes and it will really trigger some reaction strikes.
This technique works well on panfish and perch too, not just larger gamefish.
But remember, when dealing with panfish and perch you are often times on a
smaller scale, so keep that in mind when you determine how aggressive or
how large the jigging increments are. For instance, I’m not going to rip jig a
size 10 Shrimpo 1-3 feet up and down the water column to attract fish. I’ll use
more subtle movements like 4-6 inches. And, when a fish comes in I’m going to
use very small quivers to entice the fish to bite. Keep the jig moving and if you
have a really negative bite you don’t always want the fish to get a chance to
scan over the bait too long, you want them to take the bait without fully
knowing what it is.

Now, there are occasions when deadsticking and long pauses are needed, but
a very common mistake is when the fish appears, to stop jigging or doing what
you did to get that fish to show up. Sure, you might have to change the
technique and slow things down, but you don’t want to cease all movement.
Fish have a basic instinct to attack their prey right before the prey takes off.
And, if you pay close attention to an underwater camera you will see that the
fish’s prey will quiver very quickly before it darts away. That quiver tells the fish
that it’s now or never, and you will more often then not see that fish take the
bait right then and there. And this happens on all levels when fish are less
then aggressive. Everything from tiny micro-organisms all the way to large
minnows. Fins will tense up, feelers will pulse, and then the prey darts off. You
can mimic those movements by quivering or shaking the bait while you slowly
pull it away from the fish. A simple technique that has helped me land a lot
more fish during negative conditions.

Keeping the bait moving is key. Even when a person deadsticks the bait is
moving, that’s the main point of deadsticking, to allow the bait do all the work
and perform all its natural movements. Those are things that negative fish will
pick up on and that’s part of the reason why your success can increase with
deadsticking. You might think the bait isn’t moving, but it is. Even when you
use finesse plastics and no live bait, no matter how hard you try, that finesse
tail is still quivering and moving, and fish WILL notice that and join your
offering for dinner.

The Chequamegon bite for smallies had a lot of negative fish roam through, so
I had to use a much slower technique when I had fish appear on my flasher. I
used a pretty aggressive jigging technique to draw the fish in, but once they
got there I had to really finesse those fish into biting. If I held the bait still those
fish would disappear, but if I kept it moving they would stick around. I even
watched some fish move in and disappear…move in and disappear…three of
four times before the decided to strike. Keep things moving, but simple and
you can increase your chances of landing more fish on negative days.

***Watch the video that sparked this article…
Chequamegon Smallmouth Bass

By: Matt Johnson When it comes to ice fishing, the infamousauger is something that plays a role literally every time you hit the ice. Of course, there are those days where you might rely on someone else’s open hole, but as a general rule, the necessity of having an auger is vitally important to even…

By: Matt Johnson Crappies  are  a  sophisticated  fish, especially those slabs, and at times it  can   be   rather   confusing   and frustrating for ice anglers to pinpoint slab   patterns.    Some   lakes   are abundant  with slab  crappies,  while others  are  more   inclined  to  hold smaller  fish,   and  then  you  have those lakes where  you can catch a…

By: Matt Johnson We’re all familiar with 3-color flashers. We’ve used them for years and they what’s below you and react accordingly is something most of us would never forfeit. It’s to the point now that if we leave our Vexilar at home then we turn around to get it. Fishing is just not the…