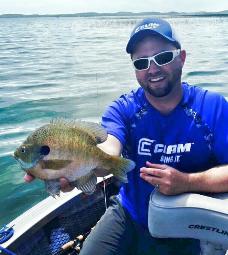 Springtime panfish are universally sought-
out, which is mostly due to their nature of
being aggressively schooled-up and more
than eager  to attack  whatever you put in
front of their stout little noses. Big sunfish
and slab crappies are  caught throughout
the   Midwestern  belt   during  the  spring
season  and  it  provides  some  excellent
action for anglers both young and old.

However, the springtime flurry doesn’t last
forever   and   those   same   aggressive-
natured fish will once again  become less
energetic and will transform into wandering nomads, only feeding when their
bellies tell them to. No longer do they devour what ever
presents itself, or at least not in areas where we once sat wide-eyed at
springtime and early summer. Now they are on a different path— a path that
leads them into the dog days of summer…

Panfish will hold shallow, there is no use disputing a statement like that, but
shallow is only relative to the body of water being fished. Shallow can mean 2
feet in the local farm pond, yet in the expansive reservoir across the street it
can mean 8 feet of water
off a break. Panfish typically hold shallow during the spring-fling as they begin
their open water adventures.

The shallow water bite may last for a period of time, but those areas will change
as the season progresses, and usually into conditions that make fishing them
tough. Thick weeds begin to sprout up and fresh budding lily pads turn into
thick mats of green and brown walls separating you from the underwater world.

Conditions call for a new approach and fishing patterns will tell you the same. It’
s time to seek out a new area, because one, the old hot spot is unfishable, and
two, the fish have found refuge in nearby deeper water, although weed pockets
are an exception. Deeper water areas usually take the form of deep weed lines
or out in open water of the main lake and mid-depth basins.

Around this time, most lakes experience an influx of thick, infectious weeds,
which surround much of the shorelines and usually have a deep and shallow
edge. Many lakes will see this veritable force beginning in 4-6 feet of water and
ending where the water drops into deeper water, usually where the break line
takes a drastic plunge. Some lakes will even have a deep edge along a flat or
where the thick mat of weeds disperses into scarce weed patches as the bottom
composition changes.

No matter the form it takes, these substantial weed lines will attract panfish, but
effectively fishing them can be difficult unless you search out for pockets in the
weeds. Weed pockets are often over-looked, but hopefully from now on you
begin seeing them as opportunities instead of just spaces of nothingness.
These weed pockets all have the potential of producing panfish. Panfish are
abundant underneath the vegetated barrier and they are scurrying about
picking off tiny morsels here and there.

You can bet a sunfish or crappies will snatch up an easy meal if it presents itself
out in the open water of one of those pockets. Some days you can sit over one
of these pockets and catch one fish after another. Several characteristics make
weed pockets as effective as they are. Weed pockets provide an excess of
sunlight, which will attract what attracts panfish, mainly baitfish and other forage.

Weed pockets also seem to have a different bottom composition in the
immediate area, which will also attract surrounding organisms and water
dwelling insects. Just like weed pockets grab our attention, they grab the fish’s
attention as well. Weed pockets are a part of my plan of attack when I hit the
water in search of Dog Day Panfish.

Plastics tend to be my preferred way of targeting these weed-dwelling panfish.
Various insect-type plastics offer a unique, natural-appealing presentation that
works well in weedy conditions. Nymphs and other insects will utilize these
particular areas, and it only makes sense that you “match the hatch.” I typically
rig these plastics with either a plain hook (for neutral buoyancy) or with a light-
wire jighead (for a more aggressive technique along deeper weed lines).
Minnow baits are another excellent option.

Many anglers stop pursuing panfish once the shallow water bite ceases, but it
doesn’t have to be that way. Locating summer panfish shouldn’t be intimidating
and many times the fish are located in areas you seek out when bass or pike
fishing. Weeds play an important role in summer panfish locations and the
presence of deep weeds make things just that much better.

Deep weeds and weed lines will draw in a huge smorgasbord of organisms for
panfish to feed on, and in very high numbers. The cool water of the deep
weeds is comforting to panfish and you can expect to find them there until the
weeds change or the temps begin to drastically drop.

Classic summer panfish spots will remain true throughout much of the summer
months and the panfish holding on them usually won’t go far if harsh weather
presents itself. Deep weeds are a classic summer spot and should be a part of
every panfish angler’s daily routine once the summer sun take form.

Weeds are very important, no doubt about that, and I usually seek out some
form of weeds, whether it’s pockets or deep weed lines, but don’t let vegetation
be your only guide to a day of success. Open water and mid-lake flats can
equally victorious on some days too.

This pattern holds true for crappies more than sunfish, but every body of water
is different and locations can vary. Crappies will roam out in open water, and
usually it’s the open water areas of a bay or the areas adjacent to deep weed
lines and structure. Crappies like chasing down baitfish that are daring enough
to adventure out into the open. The crappies know it’s an easy meal and that
they have a huge advantage over their prey in situations like that. It’s not
uncommon to find cruising pods of crappies out in 30 feet of water, suspended
10 feet off the bottom. This is where your electronics become your best friend
as you search for these pods of fish.

Crappie locations during the hot summer months can be very frustrating on
some lakes, and the possibilities seem endless. In order to narrow things down,
you need to grab a lake map and look for possible springtime locations (where
the crappies were just recently at) as well as nearby deeper water. Figure out
where the deep weed line is and where, if any, is there deeper structure.

Crappies will hold near and around deep structure during the summer, then
when the opportunity presents itself they will slide out into the open water to
feed. You will even find lakes where the crappies hold out in the open water for
extended periods of time, and they won’t feel the need to seek refuge around
deep structure. Cruising the break line and deep open water adjacent from
shallow structure—while watching your electronics—is a good way to locate a
school of crappies. Once a school is located, it won’t take long to figure out
whether or not they are hungry.

So, to expand on this concept of summer panfish, I will end with a question:

The over-looked answer (that will help you this summer):

Panfish will utilize deep water just like walleye, bass and pike. Deep water
shouldn’t scare panfish anglers, and having the willingness to target deep water
during the summer months can really increase your catch. Some days it just
takes patience and the motivation to look for meandering fish.

I’ve only touched on a few of the options that are available for panfish during
the summer months, and don’t let these possibilities be your only resort. Fishing
is constantly changing and we must change with it and adapt to the given
conditions. Watch for pockets in the weeds, check for deep weed lines, and pay
attention to your electronics for pods of schooling fish in deeper water while
motoring from spot-to-spot.

By doing a few of these things you can eliminate some of the guesswork and
wasted time spent on the water. But in the end, every day on the water is a
good day if you have a fishing rod in your hand. Enjoy the summer and good
luck!!!

We make mistakes as anglers, and oftentimes it’s those mistakes that make us sometimes no matter what you do, things don’t seem to go your way. Don’t get discouraged. Bass fishing can be a game of “walking the tightrope,” where Understanding that there are situations where you need to buckle down and take things…

By: Matt Johnson When we think of drop-shotting, we typically think of vertical, finesse fishing over a rock pile or piece of isolated structure. Or maybe even a tactic used to pick-off schooling smallmouth bass along expansive flats. Drop-shotting is without a doubt an effective way to deploy a finesse presentation. But what about casting—or…

By: Matt Johnson Both    Northern    Minnesota    and   Southern Minnesota lakes have the potential of growing pound-plus  sunfish. Many Northern lakes that are “untapped” will see some  excellent   large sunfish      populations.       However,     these populations can fluctuate and produce trophy sunfish one  year  and  not  produce  any  the next. Some lakes will experience  year classes of stunted…