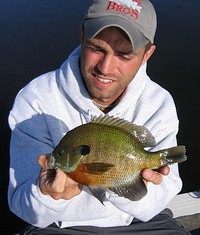 Both    Northern    Minnesota    and   Southern
Minnesota lakes have the potential of growing
pound-plus  sunfish. Many Northern lakes that
are “untapped” will see some  excellent   large
sunfish      populations.       However,     these
populations can fluctuate and produce trophy
sunfish one  year  and  not  produce  any  the
next. Some lakes will experience  year classes
of stunted  sunfish, and sometimes the effects
seem    to  be  irreversible.   So   just  how  do
Northern  areas compare  to  Southern  areas
when  looking  to land a trophy sunfish…

Many lakes that once produced big sunfish might now find themselves falling
short because of over-harvesting, biological factors–or environmental factors–
especially in the smaller lakes. The larger Northern lakes seem to withstand
some of the negative variables that are thrown at them; however, larger lakes
also need attention in order to preserve the trophy fish. So, with that being said,
if you can pinpoint those big sunfish on larger Northern MN lakes your chance
of hooking into a trophy is certainly there.

Southern Minnesota lakes–in some areas–are a more fertile than the Northern
lakes and can grow larger sunfish at a faster rate. Many of the field or “farm”
ponds/lakes of Southern Minnesota hold some monster sunfish that will push
the 1-pound mark. Certain characteristics allow for these fish to grow fast, but I
wouldn’t go as far to say they are in a totally different league than the Northern
lakes. The lakes even further South (like the Carolina’s, Nebraska, Missouri,
even Arizona, etc) experience much warmer temps all year round, allowing the
fish to grow exceedingly fast compared to the Northern lakes (which includes all
of Minnesota).

Expect to find more seven year-old sunfish in the Northern states than in the
Southern states. A three year-old sunfish down South is typically larger than a
three year-old sunfish up in Minnesota, same with crappies. Not a whole lot of
crappies live to be ten years old down in Florida, Louisiana, etc, but you will see
many (relatively speaking) ten year-old crappies in Minnesota, across both the
Northern belt and the Southern belt. Fish grow slower in Northern areas–as a
general rule–and the Southern U.S. fish don’t experience as much of a
metabolic slow-down like the fish experience up here during the winter months.

Water temps and activity levels down South will remain much higher on average
than up in Minnesota. The diet of a panfish down South is also meatier and
more frequent. Many Northern panfish feed heavily on plankton, zooplankton
and other micro-organisms (similar to the Mister Twister Nymph or Maki Jamei),
where down South you see a lot of scuds, minnows (like the Micro Shad and
Sassy Shad), crawdads (like the Micro Crawfish), larger insects (like the
TwisterMite), etc, devoured on a more regular basis. Sure, Southern state
panfish still eat their fair share of micro-organisms, but they also snap up a lot
more larger morsels as well–and on a more consistent basis. Same goes for
Northern state panfish, where they also eat their fair share of minnows and
larger forage items, but not on a twelve-month regimen.

It all comes down to the lake type, forage and surroundings (with a dash of
geographical location) when developing trophy sunfish. Some lakes just won’t
see a good population of large Sunfish, and some lakes might have at one time
seen large fish, but because of a change in conditions, might experience a
prominent decrease in larger fish.

I personally like to target large sunfish in moving water systems or lake chains.
These are bodies of water where water is coming in and moving out, which can
produce some monster sunfish, even if the average depth is shallow. A
constant flow of high oxygen, no matter the season, is a contributing factor to a
sunfish’s quality of life. You also have more oxygen for vegetation, forage and
other surroundings that allow for a healthy panfish population and growth rate.

The winter months also don’t affect these moving systems so hard, and the
strain on these bodies of water is less drastic. Having an “upstream” and
“downstream” also aids in the spawning process, especially when these
channels connect to several different lakes or bodies of water. Shallow
pools/bays along current areas will hold fish in slack water during the spawn
given the right conditions. I also like these types of systems because sunfish
have more options for hiding and places to devour food, making it tougher to
catch the brutes, which in turn can mean a better population of larger fish.

Larger current systems can oftentimes stump even the most prolific of anglers
when trying to locate big panfish, myself included. However, I believe there is
nothing wrong with that. This ensures that when you do find the big fish, you
find more than one and there are less flukes. Big fish will use similar areas at
like times, and you can pattern these fish, even on large current systems/chains
where several lakes join. A very important thing to remember though is to
practice catch and release on those larger fish, as they’ve been through a
lengthy process to reach that point and they should be considered trophy fish.

So, to the topic of Southern Minnesota lakes versus Northern Minnesota lakes…
I think your chances are good in both areas for catching large sunfish. It can
really be a timing thing though. Southern lakes will warm up faster, because
they are not only further south, but they typically have more stained water with
darker bottoms, and you might experience a better early season bite. Northern
lakes typically have excellent late-spring and summer bites for large sunfish.

If I was going to target just big sunfish during the summer months, I would hit the
Northern lakes. Water temps seem to keep the bigger fish in schools and in
more generalized areas, where the Southern lakes will experience a more
scattered, warm water effect. Larger sunfish might push deep or hug to the
bottom in the weeds during the hot summer months on Southern lakes, where
you can find larger sunfish along deeper weed lines and breaks in the Northern
lakes.

Sunfish are an excellent species to utilize when taking a kid out on the water.
They provide constant action and are a lot of fun to catch. Landing a trophy
sunfish should be considered an accomplishment, and is definitely something to
cherish!!!

By: Matt Johnson When we think of drop-shotting, we typically think of vertical, finesse fishing over a rock pile or piece of isolated structure. Or maybe even a tactic used to pick-off schooling smallmouth bass along expansive flats. Drop-shotting is without a doubt an effective way to deploy a finesse presentation. But what about casting—or…

Springtime panfish are universally sought- out, which is mostly due to their nature of being aggressively schooled-up and more than eager  to attack  whatever you put in front of their stout little noses. Big sunfish and slab crappies are  caught throughout the   Midwestern  belt   during  the  spring season  and  it  provides  some  excellent action for…

By: Matt Johnson   is different for everyone. I’m also sure it can vary depending on the body of water or region you’re fishing in. The answer might be a swim bait for those targeting giant California bass. Or maybe a live red tail minnow for those searching for trophy smallmouth bass on the Mississippi…