How much does  a trophy sunfish  weigh? 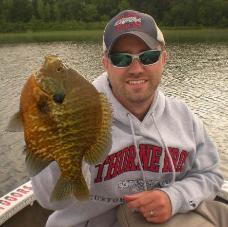 Forage also plays a huge role in this—as does overall quality of life. Some
sunfish—but not all—are reaching the end of their rope when they get into that
11 inch range, and they will lose weight and thickness, much like a human does
(OK, I’m not comparing a fish to a human, but you get what I mean). A 12-inch
sunfish is a true monster, and regardless of its weight, it’s a trophy no matter
where it’s caught. Most often than not, anything over 10 inches is going to be a
mighty thick and hefty fish.

Some lakes and bodies of water also have an outstanding forage base.
Freshwater scuds, insects, minnows, plankton, frogs and all the other goodies
that sunfish favor. Sunfish will rely heavily on a minnow diet at times, even
though many anglers don’t equate minnows with sunfish. Yes, sunfish will also
consume a lot of insects and other organisms too—probably even more so than
minnows. Having a strong and available forage base is very crucial in growing
large sunfish. It’s no wonder why those extremely fertile lakes grow monster
sunfish, because the food base is exceptional.

Weights can also depend on the sunfish species. Pumkinseeds are typically
very thick fish to begin with. We’ve all seen those 6-7 inch pumkinseeds that
are shaped like footballs, all plump-full of insects and whatnot. And then we’ve
also seen those potato-chip-thin 6-7 inch bluegills that can’t weigh more than
1/4 pound. I think there is definitely something to be said about the variance in
weight depending on sunfish species as well.

I would have to agree that using a length-to-weight measurement chart of some
sort is not always accurate, and in most cases I’d go as far to say they’re not
very accurate at all (when it comes to trophy sunfish). To me, a couple ounces
make a big difference when referring to sunfish, and those charts don’t give
leeway to the different factors that can change the weight of a fish. Standard
length-to-weight charts are just that…standard, but when referring to trophy-
class sunfish, the term standard shouldn’t even be in the same context.

Different regions and climates can play a huge role in sunfish weight and the
amount of time it takes for a sunfish to reach that weight. As we venture farther
south (and also to the west) from my home state of Minnesota, we’ll find more
fertile and “sunfish-rich” ecosystems. The “fat lands” of Iowa, Nebraska and the
farm ponds. Farm ponds also expand across much of the country.

These little 20-50 acre puddles might not look like much to the aggressive big
lake—more horsepower—angler of the Northern states, but what lies beneath
the surface will drop the jaw of even the most emphatic angler. We’re talking
about plate-size sunfish that won’t fit in an average person’s hand. The “bull”
sunfish is what swims these waters. But why do they get so big? What factors
make this incredible feat possible? It comes down to a few main characteristics…
water temperature, lake fertility and available forage.

Having year-round heat is important in sustaining higher than adequate growth
rates. No need for a metabolic slowdown and the nutrient bloom is running on
all cylinders—and it’s running all the time. The harsh Minnesota and Northern
climates are not playing a toll on these lakes. These shallow lakes won’t
experience winter-kill and activity levels are at a constant high. This is a very
crucial part in the rapid growth-rate that the sunfish experience.

Lake fertility will go hand-in-hand with temperature, but it’s not always concrete.
Fertile waters do need sunlight and other natural powers that allow them to
become rich in what causes these exceptional growth-rates. So, given the fact
that lakes farther south experience warmer year-round temperatures, it only
seems right that fertility levels increase as well. Some of the better sunfish lakes
are shallow and stained. Sunlight is soaked up and the underwater world is
constantly being flourished.

A strong forage base is something important for all freshwater species, and
more available forage means the better chance of growing big fish. Fish need
to eat, and fish need to eat a lot in order to reach trophy class. Much of a fish’s
life (and sunfish are no different) consists of looking for—and devouring—its
next meal. Certain types of forage will help in the growth process, but the
amount a fish eats can be even more important. A minnow diet will help provide
solid levels of protein, as will as diet rich in scuds, bloodworm and other protein-
packed organisms. But, a diet rich in plankton, zooplankton and other micro-
organisms is important as well.

Most lakes will have adequate levels of micro-organisms, and usually there is a
decent supply of a protein-rich meal too, but often times the areas where the
“growth-food” is located are not the areas where sunfish would prefer to be (in
reference to large lakes). For example, in some of our large Northern
Minnesotan lakes, the large schools of baitfish will roam the open spaces, and
sunfish are not always accustom to those areas, especially when these same
lakes are stocked full of hungry pike and muskie. Sunfish will hold in the weeds
and scrounge up what is left behind, or they will dabble with the minnows that
hold tight to the weeds, but more often than not they will resort to a micro-
organism and insect diet.

The problem with this is that the protein and other nutrients needed for
exponential growth are not there, and the rapid growth-rates will fall short as
well. Now, sunfish can and will get big on a micro-organism diet, but it will just
take a longer period of time. This is not a universal law and there are
exceptions to every “rule,” but in large systems like that, it will take sunfish a lot
longer to reach trophy status. An 11-inch sunfish in those larger lakes is going
to be much older than an 11-inch sunfish of one of the southern area farm
ponds. Having the right available forage right in front of their face is a key factor
in achieving trophy sunfish status.

And like mentioned earlier, there are always exceptions and lakes that defy the
odds. Some farm ponds will grow monster sunfish and you might not even see a
single minnow swimming around, which would lean towards the assumption that
those sunfish got that way on a micro-organism diet, which could be the case
and I’m not going to argue that. Every body of water is a different playing field,
and every body of water has something unique which allows it to produce the
size of fish it does. There is no uniform rule to why or how a sunfish gets to be
the size it does. Yes, there are theories and studies that can show ways and
different paths a sunfish can take to reach a trophy size, but there are lakes
where those paths are not available and trophy sunfish still exist.

The simple mention that lakes experience change can play a role as well. What
used to hold true for a body of water might not be the case anymore. A lake
which once used to be a trophy sunfish mecca might now be home to bullheads
and turtles, or just small sunfish. No matter the argument, water temperature,
lake fertility and a strong, available forage base will most definitely up the ante
in pinpointing what bodies of water will have the possibility of growing trophy-
class sunfish.

Sunfish are a lot of fun on light tackle, and trophy sunfish will push the limits of
any ultra-lite rod. Catching a big sunfish is exciting for an angler of any level
and it seems to always have that knack for bringing out the kid in you!!!