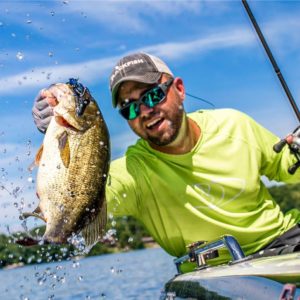 When we think of drop-shotting, we typically
think of vertical, finesse fishing over a rock
pile or piece of isolated structure. Or maybe
even a tactic used to pick-off schooling
smallmouth bass along expansive flats.
Drop-shotting is without a doubt an effective
way to deploy a finesse presentation. But
what about casting—or pitching—a drop-shot
presentation? Why be limited to fishing this
rig vertically when covering water can be just
as fun… this is where “pitching drop-shots”
comes into play and can have a place when
targeting a variety of species.

The setup. Commonly, a drop-shot setup
consists of lighter line, lighter rods, smaller
hooks and baits—things directed towards negative fish. While this mindset is
definitely true, I would also encourage you to consider larger presentations
when drop-shotting. Beef-up the pieces within the setup and you can still
employ a drop-shot scenario. Pitching a drop-shot applies to any drop-shot
setup, but don’t be limited to only using it in a finesse situation. If you want to
drop-shot a wacky-rig then go for it. If you want to drop-shot and larger creature
bait then make it happen. Even if you want to drop-shot a 10” worm then you
can do it. Just match the other pieces accordingly and away you go. Drop-
shotting is a tactic not limited to finesse fishing, but rather a method used to
present a bait. I will oftentimes drop-shot larger baits along deep weed lines
instead of using a jig-worm. Just a different way of doing things—and
sometimes a way that is new to the fish resulting in more fish caught.

The speed factor. Not to beat a dead horse, but the general thinking behind a
drop-shot application is finesse, which can mean fishing slow and “dancing” the
bait in the strike zone. When playing with various drop-shot setups you begin to
get the feel for how they should be fished, and when pitching drop-shots you
begin to realize how important speed comes into play. Now you have the ability
to swim, hop, shake—do pretty much whatever you want—in order to retrieve
the bait back to the boat. It’s almost like horizontally jigging at times, yet you can
slow down when needed—something that is hard to down with a jig-worm or jig
as it races to the bottom. Now you can incorporate more pauses if needed and
not worry about the bait falling out of the strike zone or getting caught in cover.
All we are looking to do is offer another way of presenting a bait, giving us more
options to catch fish.

Not a species affair. These techniques don’t just apply to bass. Many times
we get brainwashed to think certain tactics are specific to certain species. When
it comes to pitching drop-shots—or drop-shots in general—you can put them
into play no matter the species you’re targeting. Sure, you might have a wider
array of options for certain species, but you can still pitch a drop-shot for
panfish, walleye, trout and other species. One of my favorite panfish techniques
is the pitch a drop-shot for deep weed edge fish. Works great to not only cover
water but it gives me the ability to use a smaller offering in deeper water and
still keep solid contact/control with what I have on the end of my line. Drop-shots
have been welcomed by a variety of species and it’s a tactic that can be added
to your arsenal for those days when you feel nothing else is working.

More versatile than meets-the-eye. Drop-shots generally fill a specific
purpose, but I think you’ll be surprised with how many different situations where
a drop-shot can be used. Ever tried pitching a drop-shot along a dock line for
bass? Or what about a drop-shot rig for bedding sunfish? Don’t limit yourself to
“traditionally” fishing a drop-shot rig, but rather keep an open mind and
experiment to see how it can help you catch more fish in other situations. When
in shallow water, drop-shotting allows you to keep a bait in the strike zone
longer. As the drop-shot weight plummets to the bottom you add an element of
impulse, but then you can tease a nearby fish without having to speed-up the
retrieve in order to keep the bait at a certain depth. Now that leery bass hiding
out under a dock is no longer force-fed, but instead is gifted a meal that seems
too good to be true.

Drop-shotting might not be the most glamorous style of fishing at first glance,
but when you begin to dig deeper you will see that it has a place in just about
anyone’s bag-of-tricks. You’re not limited to only using the drop-shot in a
finesse situation, but rather it can be used for a variety of species and
conditions—not just for those negative fish. Launching a drop-shot setup along
a deep weed line, over a shallow flat or even around a dock, can produce when
nothing else does, and can turn a seemingly frustrating day into one filled with
fish and photos!

How much does  a trophy sunfish  weigh? Is there a  length-to-weight way  to gauge the  weight  of  a  trophy  sunfish?   What makes  a  sunfish   weigh-out  the  way  it does?    Here   are   a   few   answers   or “theories” to those questions… The weight of a sunfish can definitely vary depending on  the time of year and  body…

By: Tom “CrappieTom” Sawvell We’ve  seen  a  lot  of  traffic  lately about  fishing  plastics  and  which floats work with what.   Lets  try  to simplify  this  a  bit  for  everyone… Floats are like the  baits we  use… everyone has a pet.  I have used a million   different  floats   over   the years.    Some   work   well   when fished…